What is Container Networking?

It is possible to run multiple containers at the same time, each with their own installations and dependencies. This is particularly useful in instances when newer versions of an application may require a dependency upgraded that may cause conflicts with other application dependencies running on the server. Unlike virtual machines, containers share host resources rather than fully simulating all hardware on the computer, making containers smaller and faster than virtual machines and reducing overhead. Particularly in the context of web-scale applications, containers were designed as a replacement to VMs as a deployment platform for microservice architectures.

Containers also have the characteristic of portability, for example, Docker, a container engine, allows developers to package a container and all its dependencies together. That container package can then be made available to download. Once downloaded, the container can immediately be run on a host.

How Does Container Networking Work?

Each virtual machine running on a hypervisor has their own operating system, applications, and libraries, and are able to encapsulate persistent data, install a new OS, use a different filesystem than the host, or use a different kernel version.

Conversely, containers are a “running instance” of an image, ephemeral operating system virtualization that spins up to perform some tasks then is deleted and forgotten. Because of the ephemeral nature of containers, system users run many more instances of containers than compared to virtual machines requiring a larger address space. 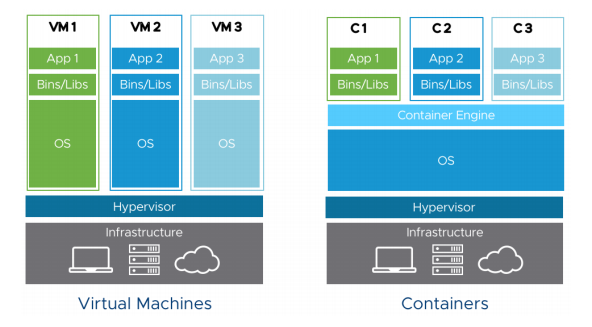 To create isolation, a container relies on two Linux Kernel features: namespace and cgroups. To give the container its own view of the system isolating it from other resources, a namespace is created for each of the resources and unshared from the remaining system. Control groups (Cgroups) are then used to monitor and limit system resources like CPU, memory, disk I/O, network, etc.

Containers are becoming rapidly adopted, replacing VMs as a platform for microservices.

Use of Container Networking in Web-Scale Application Deployments

Containers are deployed as part of the microservices architecture in enterprise environments to help encapsulate individual tasks common for large web applications. Each task may have its own container, the external-facing containers like APIs and GUIs are opened to the public internet, the others would reside on the private network.

There are five types of container networking used today; their characteristics center around IP-per-container versus IP-per-pod models and the requirement of network address translation (NAT) versus no translation required.